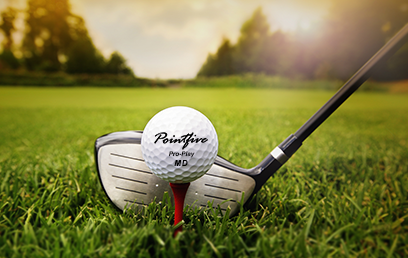 Since early on in the sport of golf, the increased distance a golf ball could be hit by the best of golfers, has led to an increase in the size & resulting cost of golf courses.  During the Great Depression of the 20's & 30's, Golf Course Architect William H. Diddel of Indianapolis, Indiana, decided to reverse this continual enlargement of courses, when he proposed that the City of Cincinnati's Recreational Department, build some small neighborhood park courses.  These were to introduce & entertain residents, to a more affordable & recreational form of golf.

Mr. Diddel hoped to get a ball developed which would fit the reduced distance requirements of much smaller courses, yet have the ball perform acceptably well by it's users.  He approached a number of major golf ball manufacturing companies, to try to develop such a ball,  but unfortunately, due to the technology of the time, none were able to produce a satisfactory product.  In the mid-50's, while training as a golf course architect under Mr. Diddel, he told me of this concept and gave me one of the resulting test balls.  This was instrumental in forming my early interest in the design, development & promotion of the shorter golf course.

In the early 1980's, the Nicklaus Design Company was hired to lay out a course on a small plot of land on Grand Cayman Island in the Caribbean Sea.  It was originally called the Britannia Hyatt Resort.  Jack Nicklaus at the time, was a major owner of the MacGregor Golf Company.  A representative of the Nicklaus organization contacted me regarding information on this matter, since they learned I was familiar with Mr. Diddel's earlier efforts.  The available land in the Cayman Islands would not allow for a conventional-length 18 hole course. So,  Jack gave the head of equipment development at MacGregor, the assignment of producing a suitable limited-distance ball, by the time the course was ready to open.   Various combinations of materials, designs & ball weights were tried,  in an attempt to meet that goal.  The result was, a foamed resin ball, much lighter than a standard ball.  This lighter weight ball (later known as the "Cayman Ball") was covered with brambles, which significantly reduced the distance the ball could travel.  However, any wind caused erratic  flight performance and the putting left much to be desired.  Another drawback, was the ball's poor durability, from normal club use.

At the same time, that this new era reduced distance golf ball was being developed, there were several other occurrences happening in this field.  The American Modified Golf Association was formed and held a series of tournaments in various US cities.  These were well attended and proved that the feasibility of competition for this new game, using a reduced-distance ball, had finally arrived.  The AMGA movement had many industry leaders, visionaries, and major supporters, such as Charlie Stine, founder and editor of Golf Week Magazine.

Many shorter golf courses realizing the advantages of quick & enjoyable play, used the Cayman ball for many events.  This included Eagle Landing Golf Course in Hanahan, a suburb of Charleston, SC.  This was an 18-hole course I designed exclusively for the use of the Cayman ball and where the ball was used all the time.  Another innovative aspect of the modified golf game occurred in the use of oversized golf hole cups, which were tried at various tournaments, as a way of improving the golfing experience.

In 1990, an innovative group of individuals from the Cincinnati, Ohio area, having experienced the overall benefits of the game, began developing, manufacturing & marketing a new shorter distance conventional looking golf ball with dimples.  With greatly improved flight & playing characteristics, they named this the Pointfive Hybrid MD golf ball.  This ball is now sold throughout the world, because of it's excellent performance on shorter distance courses.  The company also sells Hybrid Range balls for limited-distance range applications.